“I could say some nice things, but proof is always better. I have arranged about 50 conferences in the last 10 years. And there are typically about 30 speakers at each one, if you include breakout sessions. Of those approximately 1500 speakers, none of them has ever scored as high on our review survey as Doug Lansky. ”

Doug Lansky spoke at our annual Austrian hotel association conference with 600 participating hoteliers, tourism experts and representatives from industry, politics and the media plus 250 tourism students from from all over Austria. Not only was Doug easy to work with during the lead-up to our event, but our post-conference review results showed that Doug’s presentation received the highest score out of all 15 speakers! We are happy to say that he exceeded our high expectations and really inspired our participants.

Doug took the time to get to know our delegates and our industry, and customized his presentation so it was timely, relevant and entertaining for our delegates. He was our highest rated Keynote speaker at over 97% satisfaction. Doug’s authentic presentation style kept our delegates engaged and made us, as conference planners, shine! Doug was seamless to work with and was a highlight of our event.

Doug did a phenomenal job presenting to our audience of 1,000 members and community leaders. He connected and kept everyone engaged throughout the presentation. Doug was willing to adapt his presentation to our audience making it relevant and timely which resulted in high ratings from our attendees.

Smart cities demand equally smart tourism. The modern complexities of the tourism industry require a new, smart, holistic approach. Doug Lansky presents the most innovative practices of forward-thinking destinations -- a keynote filled with fresh concepts, perspectives and insightful analysis that will help you rethink the way you market and develop your destination.

There are some great lessons to be learned from our global battle with Covid-19 that will help the industry bounce back even stronger: redefining success, spacing out visitors, adapting the product offer, and preparing for tough times. Doug shows solid takeaways from places that have make smart adjustments.

How to Manage Tourism

DMOs were set up as an offensive force for marketing. But, as many coaches often tell their players: “The best offense is a good defense.” That means protecting the product and helping deliver on the brand promise. In this talk, Doug explores and explains the most cost-efficient forms of marketing, from Big Data to basic product development, as well as smart defense. Doug can show why it's in the stakeholders' best interest to work together on unified brand themes and great customer service as well as protecting their most valuable assets so they can continue to enjoy sustainable growth for years to come.

The journey begins when the traveler steps off the plane and doesn't end until they get back on. Every minute in the destination colors their experience. As their host, you want to make sure it goes as well as possible so they bring back great memories and spread the word.  Things may go well at top hotels and restaurants, but visitors spend most of their trip outside of that high-end bubble. There are plenty of crucial touch points that can slip between the cracks.  Visitor experience design might start with finding and removing any  pitfalls (long delays at customs, waits for the airport bus), but when done well, it can enhance and elevate the entire visitor experience where it's needed most. Customized Live and Virtual Keynotes from 15 - 90 minutes

HOW ARE YOU MEASURING TOURISM SUCCESS? Doug has written 10 books, sold several hundred thousand copies, and even won an award or two 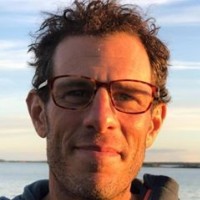 Doug Lansky has been living abroad and traveling for the last 20 years in over 120 countries. He is the author of 10 books, including 3 for Lonely Planet and 3 for Rough Guides. Doug had a weekly syndicated travel column in over 40 newspapers for five years, hosted a Travel Channel show, served as a correspondent for Public Radio’s Savvy Traveler show, served as travel editor for Scandinavian Airlines inflight magazine for three years and, more recently, as Destinations Editor and columnist for Skift. He has contributed to publications such as National Geographic Traveler, Reader’s Digest, Esquire, Men’s Journal, The Guardian, National Geographic Adventure, Huffington Post and Tnooz. On the speaking circuit, Doug has given acclaimed lectures at nearly 100 universities, spoken to a sold-out audience at National Geographic Headquarters, for the United Nations World’s Tourism Organization, as an after-dinner speaker at corporate events from Google Travel to Amadeus, and filled the largest halls at ITB Berlin for five years in a row, introducing audiences to new insights and smart tourism concepts.

Connect with Doug Lansky on LinkedIn

Presenting at these conferences